The Amakasu Incident, occurring in the aftermath of the Great Kanto Earthquake of 1923 and an outgrowth of the infamous Kanto Massacre, is relevant today as the United States experiences similar political tensions to Imperial Japan nearly a century ago.  The police forces of both nations aided and abetted violent purges or attempted purges in the aftermath of a natural disaster of unimaginable proportions, specifically a fire in both cases.
The earthquake that struck Japan in 1923 was a 7.9 on the Richter scale. It obliterated villages and helped set the city of Tokyo ablaze. The city was largely wooden buildings, and a typhoon's winds helped carry the sparks of cooking fires into a firestorm that devastated the city which left thousands homeless and at least 38,000 dead.

To talk about the loss of life would be to belabor the point, because the natural disaster was arguably the least bad part of this whole sordid tale. An earthquake (or mudslide, or tidal wave) doesn't discriminate based on nationality or ideology.

The Japanese government declared martial law in response, along with a specific bit of instruction to all surviving police stations:

“There are a group of people who want to take advantage of disasters. Be careful because Koreans are planning terrorism and robbery by arson and bombs.”

The fear of 'looting' and the excuse of martial law was enough for Japanese citizens and foreign residents to be slaughtered, for old political grudges to be pursued, and for progressive voices to be quashed.
The ensuing Kanto massacre lasted three weeks, and was only reluctantly stopped by the police, who in many cases aided and abetted it. To do the horror of these it full justice would require more words than I have allotted myself here, so a summary must do. Nearly 6,000 Koreans were killed by Japanese mobs in the chaos that followed. It can be hard to gauge how many Koreans were actually killed because the Japanese in some cases used the term 'Korean' to mean any foreigner or person with an accent to their Japanese, like the Ryukkans. They hunted them down and killed them with bamboo spears or hung them. For a fuller picture, I turn to Kate Sharpley's account:

To this list of corpses we must add people who were part of progressive movements and were active politically in Imperial Japan--labor organizers, communists, anarchists, anti-imperialists and human-rights activists. The right wing nationalists of Japan had carte-blanche for three horrifying weeks.

This brings us to Osugi Sakae--the most prominent of the Japanese anarchists, and his partner, feminist, writer and social critic Ito Nōe. Their lives, while not long, were fascinating and worth further discussion on this blog. Osugi Sakae once quipped that each time he was thrown into prison, he came out having learned a new language--he spoke German, English, Russian and Esperanto fluently, among others. He was responsible for translating many anarchist and progressive texts into Japanese such as Kropotkin's Mutual Aid.  He was a prolific writer in his own right, a proponent of free love and ethical egoism.

Ito Nōe was no less remarkable a figure. She was politically active, and through long struggle became editor of Seito magazine, which the Japanese government was none too happy about. Ito Nōe wrote and published  on forbidden topics in her magazine at the time, such as leaving arranged marriages, abortion and marrying for love, leading the Japanese government to ban those issues. This is just a small fragment of the interesting things she had done prior to the great fire, but serves to introduce her character--both she and Osugi were constantly harassed and followed by the police.

Osugi Sakae had been number one on the Japanese secret police's hit list for quite some time, along with his partner, Ito Nōe. Now, with martial law declared and murder in the streets, a kenpetai Lieutenant named Masahiko Amakasu decided now would be a great chance to round up the couple.

Amakasu, according to some sources, had treated the fire as his own personal revenge-fire-sale: adding Osugi Sakae and Ito Nōe to the list of individuals to be rounded up and executed during the Kanto Massacres while actively searching for them.
On September 16th, Amakasu found Ito Nōe, Usagi Sakae and their 6-year old nephew, Munekazu Tachibana and arrested them. He imprisoned them in adjoining cells, had them beaten and then personally strangled them to death, saving the child for last.

Their bodies were found later in an abandoned well. This  became known as the Amakasu incident.
The deaths of the three provoked widespread outrage throughout Japan--and Amakasu was court-marshalled. He was given a ten year sentence in Chiba Prison, of which he served three. Emperor Hirohito's coronation proclaimed a general amnesty and Amakasu was freed. He became the head of the Manchukuo Film Association, a high rank indeed for a thug and serial killer, and thus was in charge of propaganda in that region during the Second World War.

He took a cyanide pill in 1945 himself in Manchuria as the Soviets closed in from the north. He  lived entirely too long and presided over countless crimes.

Tomorrow will be the 97th anniversary of the deaths of Osugi Sakae, Ito Nōe and Munekazu Tachibana  at the hands of Amakasu.

Let us take a trip to now, nearly a century later where many of the same issues are being replayed in America.

The west is on  fire, see above.

The bodycount in the Western fires of 2020 has remained low in terms of immediate human lives lost--but the cost in land, family homes and emotional scarring may be incalculable as much of the western portion of the country goes up in climate-change amplified fire.

The damage to the social fabric may be greater still as disinformation and pretext rapidly subsume rationality in ways that mirror the Kanto Massacre and Amakasu incident.

For example, right-wing militias have attempted to set up road-blocks to discover 'antifa arsonists' who they believe (or use as a pretext) set the fires and are hellbent on looting their homes. They stop people fleeing the fires looking for anyone 'suspicious'. Suspicious is a vague term that can mean anything--liberal, a person of color, at basic interpretation it simply means 'non-right-wing-nutjob' and therefor Other.

Local law enforcement has attempted to quash these rumors, but there are disturbing accounts of police officers instructing militias on how to get away with murder in the wake of the disaster according to the Daily Beast.

The rumors of individual or coordinated arson, let alone politically motivated ones, has been debunked by no less than the FBI.

Things have not escalated to the level of the Kanto massacre yet--while the evidence above points to some police officers encouraging conspiracy theories, as a whole law enforcement and government swiftly debunked this rumor.
Yet it bears repeating: fascists do not need something to be true to believe it or use it as a pretext for extra-legal violence.
We as a country aren't there yet, but the right-wing is using the same playbook--using the chaos to attempt to squash imaginary threats, and when frustrated, turning to scapegoated out-groups.

It does not speak well of us Americans that this parallel with Imperial Japan springs so easily to mind. Being compared to Imperial Japan is very seldom a flattering thing, and yet here we all are.

It is a moral duty to learn the lessons of history and give the right-wing no succor or pretext for action. In a just world, those who set up road blocks or menace their fellow citizens with assault weapons would be arrested, charged with making terroristic threats at minimum and jailed.

I won't hold my breath, but I will hope, for at this remove that is all one can do.
To donate to various charities dedicated to help the survivors of the Western fires, click here. I heartily recommend that you do so.

Welcome to 1920. Wrangel attacks, the Makhnovists are forced back into their abusive alliance with Trotsky, Makhno launches the most successful surprise attack of the Russian Civil war, crippling Wrangel. Trotsky immediately turns on the Free State and blood continues to flow. 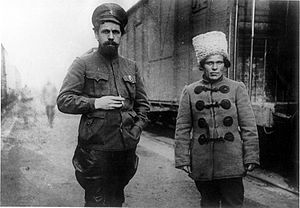 In which things escalate as usual, only moreso. The Free Ukrainian Territory under Makhno is at the high point of it's power during the Russian Civil War, we meet pedant and war-criminal extraordinaire Trotsky, and explore the Red and Black armies teaming up to defeat the White army under Denikin.