If you want to catch up on my scattershot history of Venice--from incidents of corpse theft to militant cat-dads, click here.

On with the show!

Some things I didn't get a change to discuss in detail:

1) Venetian neutrality as a humble-brag or (in the words of BRIAN BLESSED): MY DIPLOMACY TRIUMPHS

Oligarchs tend to be a conservative lot, on the whole, and this was absolutely true of the Venetian variety. This conservatism exists on a spectrum and is fundamentally based in the following proposition: "I must defend and maintain the exact system that allows me unfathomable wealth and influence first, above all."

When seen through that lens, Venice, despite being generally of the capitalist 'growth-mindset' for most of its history, it's devotion to maintaining an unbroken status quo begins to make a bit more sense. In fact, some historians have argued that surviving nearly a hundred years--and a TURBULENT hundred years of European/Adriatic history without committing to a major military campaign or being the victim of a disaster is an accomplishment of little skill and luck in and of itself. For example, in  JJ NORWHICH'S A History of Venice:

"That Venice somehow contrived to preserve her neutrality through all these upheavals, successfully withstanding the formidable pressures--diplomatic, economic and even military--which were brought to bear in efforts to persuade her to declare herself on one side or another, was an extraordinary achievement: every bit as remarkable as many more glorious aspects of her past which she looked back on with justifiable pride."

2. "It isn't stagnation, it is efficiency, probably!"

So you can see, over the hundred years or so where Venice functionally succeeded in avoiding catastrophe, a lot of rationalizations on behalf of the oligarchic government. Refusing to modernize or adapt to changing world events was not a drawback, but a virtue. To draw from Norwich again:

"Ship's cannon, she [Venice] told herself, was anyway of less value in the narrow waters of the Mediterranean; inaccurate at the best of time, it was no match for stable shore batteries. If the supply of heavy fire-power was limited it was to these batteries that  priority should be given...fortunately for her, the Turks felt much the same way; and for as long as she had no other serious adversary to fight at sea, there was little incentive for her to revolutionize the Arsenal, to throw out all the old machinery and equipment, the old skills and techniques, to embark on new and prodigiously expensive programs fraught with problems and difficulties of which she had no understanding or certainty of solution."

The old ways were valued because they worked then, the logic went, so they ought to work now. But there is a bit of a poisonous trap in this line of logic.

It assumes, for example, that the duties and responsibilities of the Venetian ruling class remained constant, which they most assuredly did not. The oligarchs managed to pare away their responsibilities to the citizenry of Venice year by year, a process accelerated by the serrata of 1297. Their financial support for what we would call community infrastructure, let alone the military--previously each noble was required to personally equip and keep war ready at least one galley, hardly inexpensive and therefor an informal check on the amount the oligarchic families could consolidate.

Well, suffice to say, these limitations were slowly discarded. The desire to keep Venice as an imperial time-capsule was very good for the upper parts of the pyramids. The famous Battle of Lepanto was fought with galleys--and not to diminish the horror and blood shed in that prolonged fight between a coalition of European powers and the Ottomans--but for so late in the historical period, it might as well have been fought with chariots.  That is to say, by the years 1700-1789, the Venetians were dependent on an outmoded ship-type as their primary military arm at sea.

While the Ottomans eventually upgraded their hardware (lasting til WWI), so to speak, the Venetians never did, and used this obtuseness as an implicit bragging point about the eternal nature of La Serenissima.

We'll discuss this more in our next episode, but I thought this was a worthwhile tangent to pursue, albeit briefly.

Venice invents capitalism through a handy hack involving double entry of numbers. This has some serious consequences for the world. 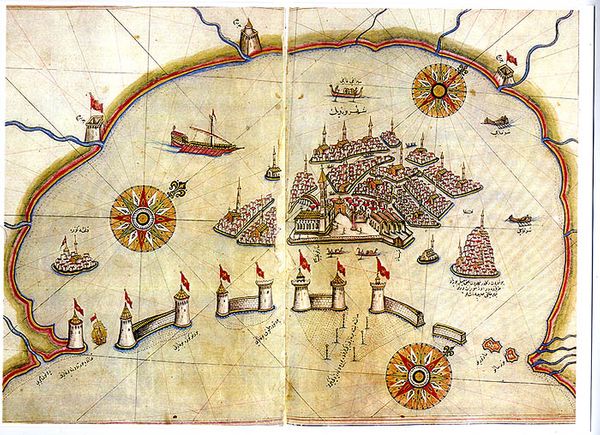 Venice and the Islamic world: frenemies, or best of frenemies? We also discuss the Renaissance, Piri Reis and how powerful the position of middleman can be.