When telling a story, things often must be excised for narrative reasons. I have a hard time knowing what to cut, and what not to, in the course of spinning a story.
But I need to make it clear, in this blog and in others to come, that there is a lot of history that simply can't fit into an hour and forty-five minutes (total) of storytelling that is meant to address the life of one principal individual actor (Makhno).
Some things are too important to leave out, so I'm writing this addendum to attempt to provide the necessary context of Makhno and the Russian Civil War. The horrors of the Russian Civil War must be examined, understood on a visceral level, and a good way to do that is to compare it to a previous conflict with similar traits: the 30 Years War (1618-1648). By doing this, I hope to give you some understanding of the horrors experienced by the civilians of both wars--in a broad study of the wars, the suffering of ordinary people is often glossed over. Here's a quick list of similarities that may help someone orient themselves in this time period:
Russian Civil War and 30 Years War: Similarities.

-In both wars, large armies (and opportunists and deserters and other unsavories) frequently crossed over the same villages and cities multiple times. This ensured a far higher casualty rate with people who were otherwise uninvolved in the broader conflict.
-The armies themselves were often responsible for atrocities (forced conscriptions, rape, murder, arson, confiscation of foodstuffs, you name it).
-All armies at this time (except, perhaps, the Green Armies, which were closer to confederations of peasant militias organized on a local level) were a source of profound damage to the citizenry.
-High level of desertion/fluidity between armies. Such deserters and side-switching increased the amount of damage done to not only civilians themselves, but their food stores--starvation and disease were major sources of civilian mortality in both conflicts--the wars interfered with the harvesting of crops, leading to still more deaths.
-All armies were viewed with hostility--an army could bode nothing good for someone just trying to live a normal life. Thusly, stragglers of any army could expect to be picked off by angry villagers if they lagged too far behind--which ensured the wheel of violence never lacked for grist.

For a fuller look at the human cost of the Russian Civil War, I recommend taking a look at Necrometrics, a site that catalogues sources of mass losses of human life, which has a page dedicated to just the civil war.

There was a savage catch-22 to being a civilian in Ukraine during the Russian civil war. If you were armed, that fact would be used by the next army or band that came through as proof that you supported one of their many enemies, and you would suffer for it. If you were unarmed, you lost even the fig-leaf of being able to defend yourself or your family and would suffer for it.  This was most prominently felt in the plight of the Mennonites in Ukraine. Patterson summarizes a complex situation through the use of a historical artifact:

"At the Winnipeg Mennonite Heritage Center there hangs a clock known less for its ability to tell time than to tell of a time passed. The clocks hands reach out at awkward angles and its faceplate bears the distinct impression of a boot. The artifact's inscription reads:
'Marauding anarchists, led by the infamous Nestor Makhno, destroyed many Kroeger clocks. When they plundered Mennonite villages the clock became a favorite target because they mistook its burnished metal for gold. They'd seize a clock, gallop out of the village and later cast it aside after ripping out the weights and chains.
One clock is known as the Nestor Makhno clock. The brutal bandit was known to take over a village and make himself home at the most prosperous house. From there he would lecture village leaders on how life would now proceed under the revolution. On one occasion a Kroeger clock bonged while Makhno was in mid-speech. The interruption startled him and in fury he tore the clock from the wall and trampled on it.
When he left, the family collected the pieces. Years later Arthur Kroeger was called upon to create a duplicate face-plate. The damaged original was donated to the Mennonite Heritage Center in Winnipeg where it still bears the dents of Nestor Makhno's boots.'
As a memorial artifact Makhno's clock communicates the essence of the collective Mennonite experience of Nestor Makhno and his movement. During the Revolution the boot of Makhno trampled the finely tuned world of the colonies. The meeting of Makhno and the Mennonites marked in time a deeply destructive moment, one that would ultimately end in the decimation of the colonies and the overseas exodus of the Mennonites."

Makhno's relationship with the Mennonites was not entirely hostile--indeed, that is part of what makes it so hard to categorize Makhno as a hero or villain--it depended so much on context. As we will discuss during the next episode, Makhno remembered people who had treated him kindly and made efforts to spare them from the worst of living in a war-zone.
Makhno sticks out as an idealist, in some critical ways. Patterson is very clear in his work Makhno and Memory that Makhno personally viewed getting personal grievances settled in the course of the war as anathema. For Makhno, revolutionary justice--noble violence in the context of redistributing resources and defending oneself--was the framework in which Makhno justified the violence he specifically ordered and participated in.

Not everyone was as high-minded as Nestor Makhno, even in the upper-echelons of the Black Army, as it came to be called. Both the charismatic Maria Nikiforova and Fedir Shchus were strident advocates of a broader, indiscriminate violence ('black terror') against the landed classes, no matter their sympathies, personal situations or pacifism. This was a key part of the Russian Revolution and Civil War--both the Red and White army also organized terror campaigns at much larger scales, which I've written about here and here.
Patterson  notes that the pattern of terror-tactics created an infinite loop of violence. In the closing to his work, he notes:

"Terror can be defined as 'a symbolic act designed to influence political behavior by extra-normal means, entailing the use or threat of violence'. Revolutionary terror emerges from a context of extreme reciprocal violence and is ostensibly based on pursuit of ‘justice’. In a revolutionary situation, this frequently occurs when the State can no longer maintain its monopoly over violence. Violence has become decentralized and legitimated through competing local forces.

Historian Arno Meyer writes: “The quantum jump of violence is both cause and effect of the breakup of a state’s single sovereignty into multiple and rival power centers, which is accompanied by a radical dislocation of the security and judicial system. As a consequence, the positive legal standards for judging and circumscribing acts of political violence give way to moral and ethical criteria. In other words, in the calculus of means and ends, the principles of law are superseded by those of ‘justice’”.
Due to the disappearance of universal law as administered through the state, justice is subjectively applied according to competing power. These competing notions of justice come into conflict, triggering, as in the case of Makhno and the Mennonites, a state of escalating violence in which each group attempts to use force and fear to compel the enemy to accept their regime. In this scenario, the moral line between justice and terror begins to blur."

We'll discuss  Fedir Shchus's massacre of villagers at Silbertal on Thursday but for Nikiforova, simply being part of the landed classes or nobility was a death-sentence worthy offense. We'll talk more about that when the next episode drops.

But 'relatively-high-minded' doesn't mean 'morally clean', but it helps distinguish Makhno from callous individuals like Lenin, Trotsky, Denikin and Kolchak who often receive plaudits from various ideologues when their policies intentionally led to the deaths of hundreds of thousands.

I'm not singling out the Black Army's crimes, which occurred in a decentralized, uncoordinated way--Makhno even recognized this as a problem in 1918 and passed a resolution condemning to death anyone who engaged in 'unrevolutionary behavior'. More than once, he or someone close to him would shoot a comrade who violated the revolutionary morality regarding civilian casualties, porgromism or rape.  It didn't solve the matter, but this  showed Makhno was aware of the problem and took steps to try and stop it.

That distinction makes little difference to the dead, but it does make a difference in how we perceive Nestor Makhno. He stands in stark contrast to  Trotsky's endorsement of terror-tactics and the Bolshevik use of secret police (Cheka), Denikin's nakedly anti-Semitic rallying cry for the White Army and encouragement of pogroms, or Gregoriev (Red Army cossack who tried to defect to the Black Army and found out the hard way the Agafya Kuzmenko isn't the forgiving type).

If you liked what you read, or want to tune in for Thursdays episode, I recommend checking out this link (Facebook is an Orwellian hellscape but hey free-web-hosting) for the show details, or subscribing below to keep current.

In which we examine Nestor's roller-coaster year from exile to ascendancy in Ukraine. Along the way he rubs shoulders with notables, heroically restrains himself from murdering Lenin in a work-meeting, high-fives Kropotkin and also dresses in women's clothes to spy on his enemies. 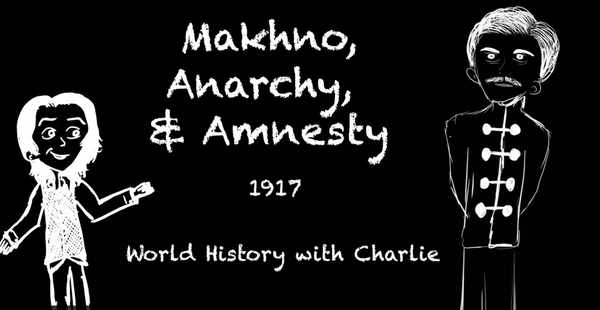 In which we dive into the eventful years of 1917. Makhno gets a lucky break, meets a new friend in prison, and Kerensky has a very bad year. Like, a Lenin-level bad year.