In which we dive into the eventful years of 1917. Makhno gets a lucky break, has a break-down, and Kerensky has a very bad year. Like, a Lenin-level bad year.

This is part three of a seven part series on the Ukrainian anarchist Nestor Ivanovich Makhno. If you want to get some context from the time of Catherine the Great (and her en-serfment policies), the dissolution of the Hetmanate and Crimean Khanate and Pugachev's uprising against Catherine the Great, click here. Or if you like to live dangerously, and fly without instruments or context, continue on ahead without clicking a single link. I dare you.
For a brief history of the Russia Civil War through music click here.
For my previous work on the callous and comically incompetent reign of Alexander Kolchak during the Russian Civil War in Siberia click here.
For the previous episode where we discuss Nestor's troubled childhood, the Mennonites and whacky assassination antics, click here.

Addendum and sources:
Anarchism was (and is) a global phenomenon. While we will be focusing on anarcho-communism (inspired largely by Kropotkin's works) in the Ukraine before and during the Russian Civil war, there were other anarchist uprisings against oppression and imperialism from the Congo to China before the goddamn Marxist-Leninists co-opted that too. I digress.
To make this video--and the ones that come after it--and get it within time constraints. I've had to make cuts to important events that occurred in each year I cover--this is an exercise in storytelling, and if I'm lucky enough, hopefully my abridged telling of (part) of Makhno's story will inspire you to check out the sources below for a bigger and more comprehensive picture. That said, let's get into the thick of it.
A quick timeline of the European history of anarchism might help place Makhno in context of his times (and get into our sources):
-In the 19th century, Pierre Joseph Proudhon (1809-1865) coined the term 'anarchist' and wrote extensively on mutualism in France. He also coined the term "Anarchism is Order without Power".

-Mikhail Bakunin (1814-1876)  is the next anarchist thinker of note. Bakunin was focused on stripping the State (and the tsar, which was the embodiment of the Russian state) of power. Unlike  thinkers like Lavrov, a populist who encouraged peaceful and incremental change brought about by the people themselves with help from intellectuals, Bakunin was strident in his calls for force to be used against the empire.
He was not an admirable figure, being an anti-semite and rather obsessed with the destructive part of anarchism rather than the building of a world of democracy, voluntary association and no more masters. It is worth noting that Bakunin's exaltation of violence extended into the past--consider this passage from the Appendix A of Statism and Anarchism:

"There is one person who dares go against the mir [community]: that is the brigand. This is why brigandage is such an important historical phenomenon in Russia--the first rebels, the first revolutionaries in Russia, Pugachev and Stenka Razin, were brigands."

So, as we see, it wasn't just anarchist writers who knew Makhno personally like Voline, Belash and Arshinov who refer to Pugachev as a folk-hero for his defiance against the imperial state. Bakunin was doing it before Makhno was even born. According to Bakunin, the only person who could ever be truly free was the brigand.

It should surprise nobody that Bakunin was fast friends with the ur-nihilist, Nechayev. Nechayev was at once a darkly comical and terrifying figure who failed to run a terrorist cell. Nechayev wrote works on being a professional revolutionary that would shape, among other people, Lenin's tactics and conduct during the coup of 1917 and beyond. For Nechayev, the only important thing was that the state be destroyed--what came after never-so-much as entered his head.

Lastly, and most importantly, we have Pyotr Kropotkin. Certainly one of the most famous anarchists, and definitely one of it's greatest writers.

The  works I used for this show are The Conquest of Bread and Mutual Aid, though we will be using quotes from his short pamphlet Anarchist Morality to illustrate key points.

Kropotkin is basically anarchist Santa: he makes kind suggestions and always shows the receipts for his work. I would love to do a series on Kropotkin's adventures and writings sometime, but I've already been distracted long enough from the main point.
Kropotkin fervently believed that people are good at core, that their impulse is to help, not to harm one another (a point re-iterated at length throughout Mutual Aid). The state (and concentrations of power) serves to corrupt and twist people's naturally altruistic impulses, and serve as active barriers to a more just and equitable world. Therefor, the state (and all centralized authorities) serve to not only enslave people, but to actively cut against their better natures.
The main thing to remember about Kropotkin is his definition of solidarity. From "Anarchist Morality":

"Equality in mutual relations with the solidarity arising from it, this is the most powerful weapon of the animal world in the struggle for existence. And equality is equity...by proclaiming ourselves anarchists, we proclaim before- hand that we disavow any way of treating others in which we should not like them to treat us; that we will no longer tolerate the inequality that has allowed some among us to use their strength, their cunning or their ability after a fashion in which it would annoy us to have such qualities used against ourselves."

(Emphasis mine, of course). This basic idea of forming voluntary associations, using direct democratic action to negotiate disputes and to treat everyone as you would like to be treated are the core tenets of Kropotkin's argument throughout "Anarchist Morality" and his greater body of work. These ideas would be critical in shaping how Makhno conceived of an anarchist Free Territory.
I also drew on Makhno's own thoughts on anarchy, as you can see here:

Anarchism does not depend on theory or programs, which try to grasp man's life in its entirety. It is a teaching, which is based on real life, which outgrows all artificial limitations, which cannot be constricted by any system.

Anarchism's outward form is a free, non-governed society, which offers freedom, equality and solidarity for its members. Its foundations are to be found in man's sense of mutual responsibility, which has remained unchanged in all places and times. This sense of responsibility is capable of securing freedom and social justice for all men by its own unaided efforts. It is also the foundation of true communism.

Sean Patterson: Makhno and Memory: Anarchist and Mennonite Portraits of Ukraine’s Civil War. Patterson continues to be indispensable. Makhno is a man, not a saint, no matter how often I make tongue and cheek jokes about his badassery. Patterson picks up on something further that I mentioned in the video--the nervous fits that would sometimes overcome Makhno. In the video, I refer to the incident with the former policeman, but such things would happen throughout the Russian Civil war and last days of WWI. Patterson notes just such an incident occurring in 1918, which we will get into next week, but in a battlefield situation.

Max Boot, Invisible Armies: A History of Guerilla Warfare.
This book has very little to say about the Russian Civil war, but there is a workmanlike section on the history of anarchist terrorism included. Boot has a good grasp of the overall timeline of anarchism as a widespread social movement (pre-existing communism by several decades, and later having the Bolsheviks co-opt the idea of worker's councils, soviets, in Russian). What Boot doesn't have, however, is an appreciation for the subtleties of anarchist philosophy. As this book is largely used as a reference guide to the period, and the fact that Boot is quick to note that anarchists are and were not (despite that being a term that Donald Trump and the fascists currently in control of the United States) by nature  terrorists, these are gaps that can be ignored in his work.
Skirda, Alexander. Nestor Makhno: Anarchy’s Cossack This is a valuable  work which goes into copious details about the back and forths of Makhno's life and incorporates as many primary sources as possible.

Makhno's own writings on the year 1917-April 1918, which I will explore more thoroughly next week but formed the backbone for this episode's timeline.

Here's the Q and A recording from last night. Subscribe below to catch up faster!

In which we examine some similarities between the Russian Civil War and the 30 Years War, examine Patterson's definition of terror, and examine Makhno's relationship with Mennonite colonies in brief. 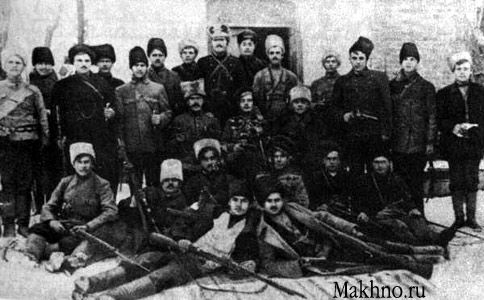 In which we talk about the man himself, his childhood, and early adventures. Oh, and postage and its role in assassinations.