Welcome to part one of my (extremely limited) history of Venice. We'll be taking samples of whacky antics of the doge in the long history of Venice, and exploring how Venetian history shaped the idea of the modern state--for good or ill, but mostly ill.

If you'd like a bit of context, check out the prologue here where we have a cheerful conversation about the glories of corpse theft and lions.

Today, we're gonna make an introduction to the office of the doge. In the video below, we discuss the use of institutional complexity as a deterrent to (non-approved forms of) corruption, whacky election antics, post-mortem audits and the fact that terms of service agreements go further back than one might expect.

A few notes outside of the video:

Historian JJ Norwich has an excellent quote about telling Venetian history apart from Venetian myth:
"One of the most infuriating aspects of early Venetian history is the regularity with which truth and legend pursue separate courses."
Norwich then lists one of those wonderful myths that seem to crop up around Venice and it's early years:

"It would be pleasant but by no means easy, to accept the traditional theory about the origin of the name [Venice]. Sansovino--the scholar-son of the architect, whose Venetia, citta nobilisima et sngolare, descritta in XIII libri, published in 1581 remains one of hte greatest works on the city ever penned--states it thus: 'It is held again by some that this word VENETIA signifies VENI ETIAM, that is 'come again, and again, for however oft you come, you will always see new things and new beauties.'"

In short, for early Venetian history in particular, it is hard to sort the cool stories apart from what may have actually happened. The Venetians, throughout their thousand-year long history as a merchant republic, certainly considered themselves a people apart from their neighbors, and indeed, singular. Call it Venetian exceptionalism. It is part of what focuses the Venetian identity as a state, it's attitude towards its citizens, capitalism and ruthless economic expansion, as we shall explore later.

But onto lighter topics!

On the name 'Doge'

I admit, when I started researching this series, that this scene went through my head pretty much first thing. Knowing that 'doge' has the same root origin as the word 'duke' makes the above clip doubly hilarious. I grew up with Danny Kaye--a superlative actor, mimic and gay icon--and so armed with this new knowledge, the quick patter of the Court Jester's "the duke, the duchess and the doge" scene functionally reads like this if we assume duke and doge are more or less the same word. A brief excerpt:

Perhaps it is better that doge became its own word, with its own implications, inferences and cultural meanings to parse.

Historian Gary Wills recounts the simple ten step process (or is it sub-process?) for choosing electors to elect the doge:
“The labyrinthine method of choosing a doge involved staggering exercises in voting and sortition—choosing men by lot was just one of many ways Venice resembled Athens in its choice of officers. The process had ten steps:

‘From the Larger Council, thirty men were chosen by lot;

Then nine were chosen by lot from the thirty;

Then the nine voted for forty;

Then twelve were chosen by lot from the forty;

Then the twelve voted for twenty-five;

Then nine were were chosen by lot from among the twenty-five;

Then the nine voted for forty-five

Then  eleven were chosen by lot from the forty-five;

Then the eleven voted for forty-one;

Then the forty-one elected a new doge.’

“Complex as this already sounds, such a schematic presentation cannot convey all the peripheral controls that were tinkered with, reinforced after periods of laxity or gone through as rites to purify the process. Minimum numbers of votes were required for each member of the elected panels.  The key groups had to be sequestered by sending an official out the west door of San Marco to pick the first boy he saw under fifteen to be the ballotino (ballot boy). The ballotino would count votes in the larger council throughout the doge’s reign and he would march with him in the city processions.”

The pledge (promissione) was drawn up specifically for each doge. The dogaressa was also bound by a separate one. In short, as we discussed, it was a living document meant to define the limits of the doge's power--what he could do, clear up ambiguities clever doges of the past had exploited, and specifically prune his power. In later years, it would even limit the sort of gifts (bribes) that could be given to the doge (rose-water, for some reason, was one of the few items specifically cited as A-OK to give doges). Other items included on the promissione included, but weren't limited to:
-Preventing the doge from opening his own mail alone (conspiracy-prevention)
-Preventing the doge from leaving the ducal palace without his posse (no sneaking off to commit conspiracy)

-Meeting with family members unsupervised? Banned! He might be plotting something!
-No pimping out the Doge's personal quarters--Venice had strict sumptuary laws--clever doges got around this by starting what can only be termed 'art/public-works turf wars' where they would commission some fantastical project or art work and make it really prominent--and then for the Venetian government to try to diminish it in some way or another or put it out of the way (As ably chronicled in Gary Will's exhaustive work on the subject) to remind the next doge that he wasn't all that and a bag of chips.

The promissione eventually ballooned, in the later republic, to a hundred page plus document (that would be read aloud, in its entirety, to the doge every two months whether he liked it or not--or whenever he stepped out of line).
Get a good hustle in as doge? That same trick wouldn't work twice--the promissione guaranteed that.

With all these limitations (and that is far from all of them above), why would anyone want to be doge? There are a fair few reasons.

-Prestige. Having a doge in the family was a huge social booster and point of pride.
-Business opportunities. Natch.

-Personal power. This may sound counter-intuitive, but the doge was legitimately one of the few people who knew what was going on in all major committees that made up the Venetian government, which allowed him, in theory, to construct or advise foreign and domestic policy in a way other members of the Venetian government simply couldn't. He also was one of the few people to coordinated with the only other "life-tenured" officers of the republic--the caretakers, the Chancellor (who nominally spoke for the common people) and the unelected bureaucrats of the republic who kept the majority of the great Venetian machine running. His power was limited and constantly hemmed in, but it was still considerably more than most people's in the republic. As Wills puts it "The doge's power was resented, but could never be erased."

Here's the talkback session! In it, we discuss who was explicitly banned from dogeship from the get-go, the nature of oligarchy, and a fun idea for a  short fiction story featuring a young girl ballotino who is mistaken for a boy and rises through the Venetian ranks. 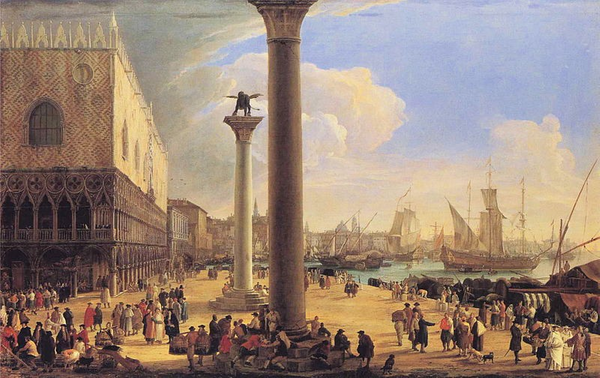 Turns out that empire building ain't pretty, and the Venetians profited off the slave trade for quite some time before whitewashing it out of their history.

In which we talk about Saint Mark's 700 year long nap, abduction by the Venetians and the explosion of winged lion statues in Venice!